Enginkehlap News 13-21 from the Office of the Governor 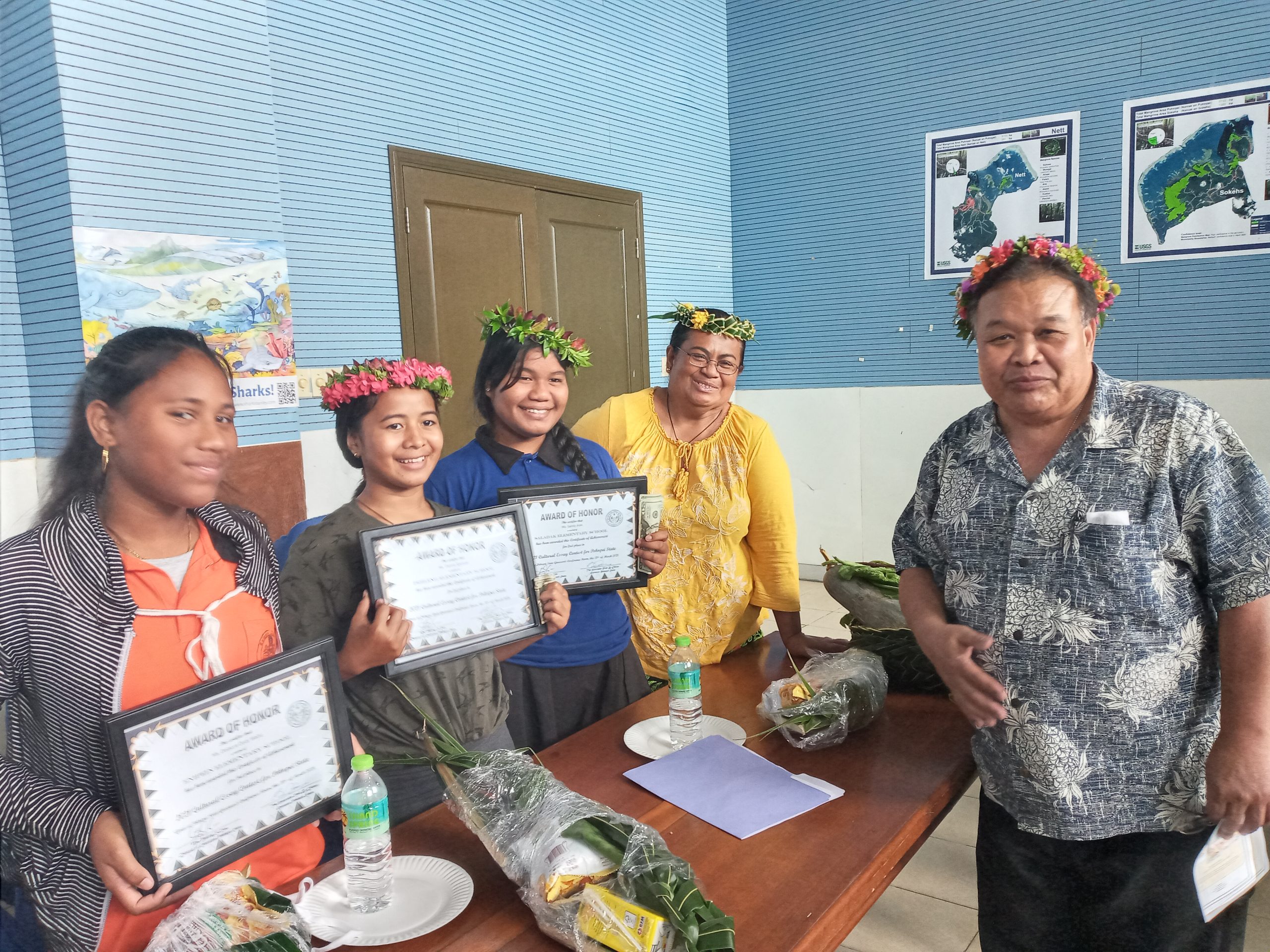 On Wednesday, March 31, 2021, Cultural Day was celebrated in the Governor’s Conference Room, Peilapalap, Kolonia. This year’s theme was:

Attending this event from the Mwoalen Wahu or Royal Council of Chiefs was Doakehsa, Nanmwarki of Pingelap, Dr. Berysin Salomon, and the Chairman of the Mwoalen Wahu, Iso-Nahnken of Nett, Salvador Iriarte.

The MC for the event was the Vice Chairman of the Cultural Day Committee, Mr. Jason Barnabas, from the Historic Preservation Office. Deacon Mike blessed the opening of the ceremony. Governor Oliver delivered welcoming remarks. He conveyed his appreciation for the arrangement and celebration of the 37th Cultural Day in Pohnpei to the Cultural Day Committee. He highlighted the importance of cultural heritage and identity, especially in the younger generations. He shared the success of the NEO TERO program at Saladak Elementary School, which recently held an event to showcase their knowledge of cultural and traditional skills, as an outstanding example of cultural and traditional preservation.

Mr. Santos Abraham, Chairman of the Cultural Day Committee, spoke of the state-wide essay contest based on this year’s theme: “Sapwellimetail Tiahk, iei Sapwellimetail Ieiias”. He outlined the selection process and criteria for choosing the top three essays and introduced the students as they each read their essays. The winners of the essay contest were:

They each received certificates presented by Governor Oliver, IsoNahnken Iriarte, and Doakehsa Dr. Berysin Salomon, and Cash awards $50, $40, and $30, respectively. Iso and Doakesa later contributed $60 to each student in addition to their cash prizes.

Iso-Nahnken of Nett, Salvador Iriarte, addressed the crowd with a closing remark. Isohko spoke of culture, tradition, and the advancing of our society. Isohko applauded the children for their thoughts on tradition and custom shared through their essays. Isohko encouraged all to continue to apply the practice of culture and traditions, especially the practice of speaking your native tongue, which Isohko noted is important to sustaining culture and tradition. 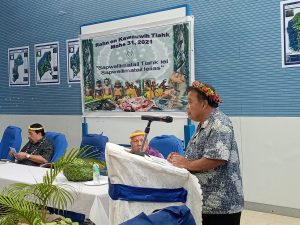 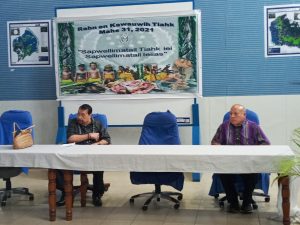 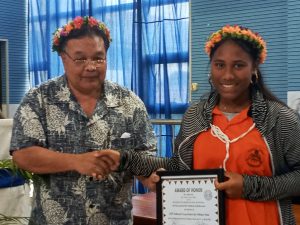 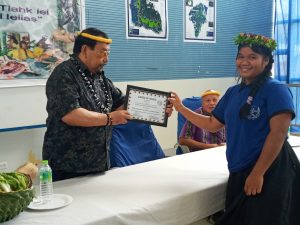 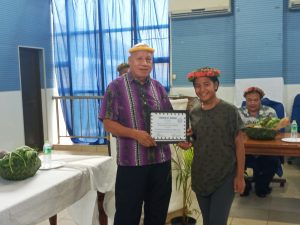 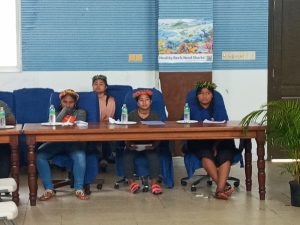 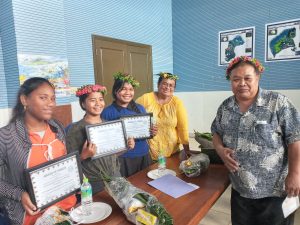 Governor Oliver opened the meeting conveying his appreciation for the opportunity to meet with the National Task Force and Pohnpei Congressmen, including Chairman of the 21st FSM Congress Health Committee, Hon. Ferny Perman and Vice Speaker, Hon. Esmond Moses. Governor Oliver made reference to the most recent FSM Congress Resolution 21-252, specifically page 9 and 10 of the document as a basis for this meeting to move forward with repatriation, which reads in part:

”the National Task Force shall work in consultation with each of the states for the purpose of establishing and further developing their quarantine and isolation facilities standards and capabilities. When the facilities within any of the states are developed to acceptable standards, the states will work with the National Task Force to develop a plan for the repatriation of FSM citizens, FSM students, and the return of FSM residents. The repatriation of FSM citizens shall be prioritized and only after our citizens have been repatriated, further plans may be implemented to allow for non-citizens to enter the FSM. However, after all, FSM citizens who are on medical referral or are receiving medical treatment outside the FSM, and their medical attendants have been repatriated, an exception may be made to allow for the entry of the ambassadors of foreign embassies and the heads of missions of non-government organizations with diplomatic status, on a case by case basis, upon consultation and approval of the National Task Force and State Task Force.”

Governor Oliver referred to the completion of the Medical Monitoring Area (MMA) last week, along with the rollout of the Moderna COVID-19 immunizations, and said to the FSM Congressmen and FSM Task Force, including the President’s Chief of Staff, and said Pohnpei is ready.

Congressman Ferny Perman asked the National Task Force members, “What is our next step?” He noted that Pohnpei is asking FSM to move forward.

“How do we move forward with the request coming from the Governor himself?” asked Congressman Perman.

Governor Oliver thanked the National Task Force, FSM Congressmen, and the President’s Chief of Staff for the opportunity to move forward with the repatriation of stranded citizens especially the medical referral patients who were returning from the Philippines last year and have been in Guam for over one year now. 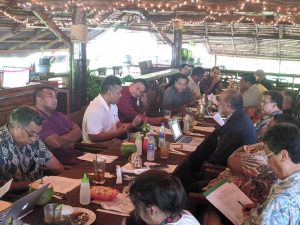 As of April 5, 2021, 8,500 people have received the first dose of the Moderna COVID-19 vaccine, and 3,538 people have received the second dose, completing the series. Plans to administer the vaccine in the municipalities are currently being formed and consultations with local government and community leaders have already started in Madolenihmw and U. All residents ages 18 years and older are eligible and highly encouraged to receive the vaccinations.

Governor Oliver was informed by President Panuelo in a letter dated April 5, 2021, that the FSM National Government has designated May 13, 2021, for the repatriation of stranded citizens from Guam. A press release published the same day went on further to quote President Panuelo, who stated “ “We are committed to May 13th as our first repatriation activity from a COVID-19 affected jurisdiction,”. Pohnpei State COVID-19 Task Force is working with the National Government to safely and properly receive the incoming passengers. The US Embassy has just announced (April 6, 2021) that they will fund two repatriation flights from Guam on May 13, 2021. More details will be released to the public, including numbers, testing, immunization, and quarantine requirements.

Dec 6, 2022 PIO
Enginkehlap News from the Office of the Governor

Dec 1, 2022 PIO
Enginkehlap News from the Office of the Governor

Dec 6, 2022 PIO
Enginkehlap News from the Office of the Governor

Dec 1, 2022 PIO
Enginkehlap News from the Office of the Governor

Nov 8, 2022 PIO
Enginkehlap News from the Office of the Governor