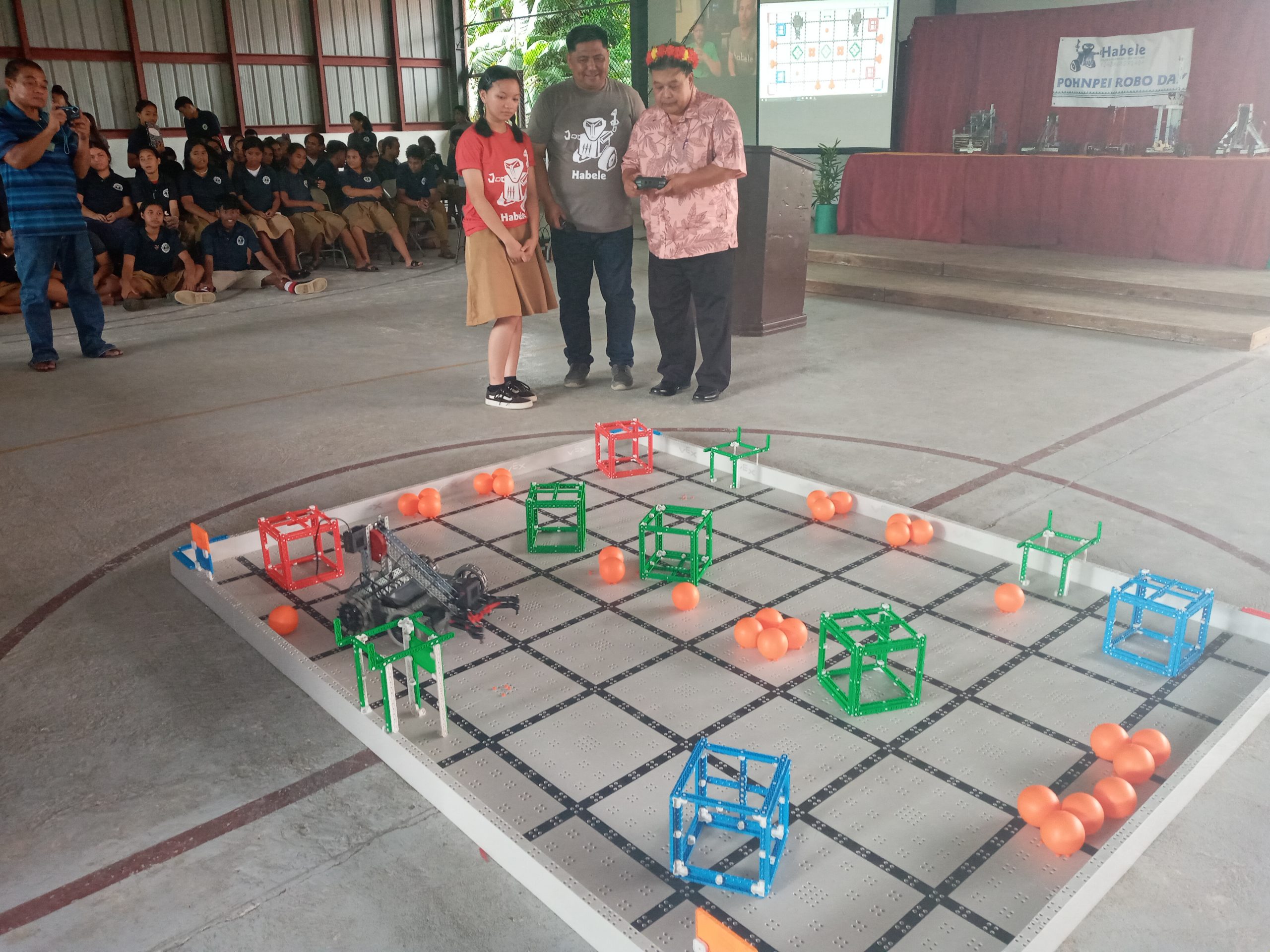 The repatriation date from Guam has been identified as May 13, 2021.  Two flights on military aircraft, funded by the US Embassy, are scheduled that day.  The final list of passengers is still being decided upon but will include medical referrals and students stranded in Guam.

On Tuesday, April 13, 2021, Governor Oliver attended the opening program for Pohnpei Robo Day 2021 at Our Lady of Mercy High School (OLMHS) Gymnasium.  Pohnpei Robo Day is an annual robotics competition between Pohnpei High Schools that showcases student creativity, teamwork, and competitive spirit.  This is the third Pohnpei Robo Day, which was started by Habele, a non-profit organization supporting Micronesian students through scholarships, robotics, and books, through a partnership with the US Office of Insular Affairs in 2019.

Governor Oliver delivered short remarks, conveying his sincere appreciation for being invited to such a unique event, and expressing his gratitude for Habele and their partnership with the US Office of Insular Affairs for making Robo Day possible.  While he admitted that he did not know anything about Robotics, he noted that creative minds have changed the world since the time of Leonardo Da Vinci and Thomas Edison with revolutionary inventions.  Governor Oliver highlighted recent events like Student Takeover Day to emphasize the importance that the Oliver/Perman administration places on the development of the youth of Pohnpei.  He called the Students and their Robots assembled for the competition brilliant, sharp, and smart. Governor Oliver encouraged the students to continue to create and innovate for the good of everyone, to help move us all forward.  Governor Oliver was allowed to operate one of the robots on the competition floor, to kick off the competition.

Established by former Peace Corps Volunteers, Habele is a non-profit organization supporting Micronesian students through scholarships, robotics, and books.  For more information on Habele, visit their website at https://habele.org/

On Wednesday, April 14, 2021, Governor Oliver received Mr. Nobuo Lopez from the Overseas Fisheries Corporation Foundation of Japan (OFCF).  Mr. Lopez represented Mr. Uchida Kazuhisa, OFCF’s resident representative for the Federated States of Micronesia (FSM).  Mr. Kazuhisa was recently identified as the latest resident representative to FSM but unfortunately has not been able to assume his post here in Pohnpei, because of COVID-19 restrictions concerning international travel.

Mr. Lopez conveyed Mr. Kazuhisa’s greetings to Governor Oliver and presented face masks on his behalf.  Mr. Lopez also related that Mr. Kazuhisa is anxious to arrive in Pohnpei and continue the work of OFCF in Pohnpei.  The Overseas Fishery Cooperation Foundation of Japan (OFCF) was established in June 1973, with the aim to build, maintain and enhance win-win relationships in the fisheries field between Japan and coastal countries, including the FSM.

On Wednesday, April 14, 2021, Mr. Asterio Takesy, Vice President of Governmental Operations for Bank of Guam and former FSM Ambassador to the United States of America met with Governor Oliver in the Governor’s Office.  The reason for the meeting was to request consideration for a technician from Diebold (the company contracted by Bank of Guam (BOG) to service their ATM machines) to be included in the earliest repatriation trip.  He noted that BOG understands that there are priorities for repatriation and their position to ask for consideration will not be at the expense of those priorities.

A formal request has also been lodged with the National Government for the same consideration, by the BOG.  Ambassador Takesy called the current ATM banking situation “dire” and the Pohnpei Branch is looking to lengthen their normal working hours to deal with the current situation if approved by BOG Headquarters.  This should be known by Monday (April 19, 2021).

The plan shared by Ambassador Takesy is to replace all three ATM machines with brand new, larger, higher capacity machines.  Each machine weighs approximately 2,000 lbs, with dimensions similar to a US standard refrigerator.  The ATMs will be transported to Pohnpei either by ship or airplane, depending on their request for consideration.  The Diebold Agent identified to service the ATM machines has already completed vaccinations and been to Palau to service their ATMs as well.

Governor Oliver advised Ambassador Takesy that BOG’s request will be conveyed to the Task Force.  He updated Ambassador Takesy on the current repatriation efforts, including quarantine requirements that are still being discussed with both Task Forces and other arrangements like numbers and the use of United Airlines.  He also reminded BOG about a previous request to install an ATM in the Pohnpei Administration Building.

On Thursday, April 15, 2021, United Airlines Acting Manager, Mrs. Easter Shirai, and Mr. Rickson Oliver met with Governor Oliver, Chief of Staff, Kapilly Capelle, and Director of Resources and Development, Mr. Hubert Yamada.  The purpose of the meeting was to discuss repatriation efforts beyond the planned May 13, 2021 repatriation flight sponsored and paid for by the U.S. Government.

Chief of Staff, Kapilly Capelle, thanked Mrs. Shirai and Mr. Oliver for their visit.  Mentioning the May 13, 2021 repatriation flight sponsored and graciously paid for by the US Government, he noted that for repatriation purposes, this is a one-shot deal.  He stated that Pohnpei State is looking to continue repatriations beyond that.

Mrs. Shirai noted that in terms of the schedule of flights, United Airlines is currently scheduling flights on a month-to-month basis.  For the month of May, there are five scheduled flights, and heading into June, there are expected to be more flights.  She noted that United Airlines shares the goal of repatriation to reunite families separated due to the COVID-19 pandemic, and is ready to assist the Government.

Governor Oliver told Mrs. Shirai that the goal is to maximize the capacity of Pohnpei’s quarantine units to accommodate as many passengers as can be safely handled.  He asked Mrs. Shirai about United Airlines aircrew and frontline workers’ status with regards to immunizations.  Mrs. Shirai told Governor Oliver that while the vaccination is not mandatory for United Airlines employees, the Pohnpei staff with the exception of three employees (two medically exempted, one off-island) have all been immunized.  She also noted that the flight attendants have also been immunized.

Chief of Staff Capelle noted that immunizations of United Airlines employees will decrease the chances of transmission on repatriation flights and along with Governor Oliver was happy to hear of United’s Pohnpei branch and flight attendants immunization status.  After further discussion on flight schedules, it was decided that the May 15, 2021 flight would be best served for Pohnpei residents.  This is because this flight comes directly from Guam to Pohnpei.

Mrs. Shirai noted that Palau and Majuro have already started repatriation flights with United Airlines assistance and their experiences can help with repatriation flight preparations here. With current SOP’s and using the Guam to Pohnpei direct flight, United Airlines can accommodate the May 15, 2021, proposed flight, Mrs. Shirai noted.  She also shared that the current aircraft model for Guam to Pohnpei direct flight can accommodate 152 passengers.

The students, teachers, and parents were welcomed by the Director of the Department of Education, Mr. Stanley Etse, in the Governor’s Conference Room.  The students were then given a tour of the building, starting with a visit to Governor’s Office.

Governor Oliver received the students, teachers, and parents to the Governor’s Office, which he advised is their office as well.  He encouraged the students to continue to learn and work hard and shared some information about the Governor’s Office, including a quick history lesson that included the names of the previous Governors of Pohnpei.  He thanked the teachers and parents for their support of the student’s education.

The students were each presented with a backpack that contained a water bottle, crayons, and coloring books from the Governor’s Office, and notebooks and pencils donated by Ray and Dors.

Both teams asked questions from Governor Oliver regarding the debate topic, on whether face masks or immunizations and quarantine should be required by law.

The questions asked by the High School Seniors were sharp and perceptive.  Governor Oliver encouraged the students to not only visit the Governor’s Office but also to visit the Attorney General’s Office and also the Pohnpei COVID-19 Task Force to gather more information for their upcoming debate.

Sep 20, 2021 PIO
Enginkehlap News from the Office of the Governor