In a short ceremony held at the Governor’s Conference Room on August 17, 2020, at 10:00 a.m., four members of the Pohnpei State Contract Review Board were sworn-in by the Governor of Pohnpei State, Hon. Reed B. Oliver.  Fr. Dave Andrus, S.J., blessed the occasion with an opening prayer.  In attendance was Iso Nahnken of Madolenihmw, Hon. John Adolph, as Administrator of the Office of Transportation and Infrastructure (T & I), Hon. Ausen T. Lambert, Speaker of the 10th Pohnpei State Legislature, Lt. Governor Perman, Pohnpei Utilities Corporation (PUC) General Manager, Nixon Anson, spouses of members, relatives, T & I  and Governor’s Office staff.
After the administration of the oath, ISO Adoph and Speaker Lambert presided over the presentation of certificates of appointments to the members as follows:
1. Mr. Quirino Loyola
2. Ms. Josephine Carl
3. Mr. Stanley Etse
4. Mr. Alex Nanpei 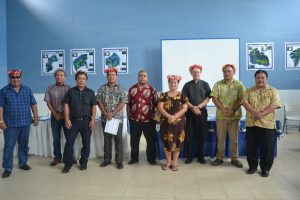 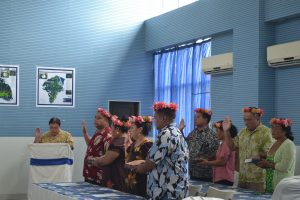 Governor Oliver gave brief remarks by congratulating the new Board Members and thanked Speaker Lambert and all members of the 10th Pohnpei Legislature for their blessing and support in the confirmation process. He also thanked and recognized those who were in attendance especially spouses and relatives of the members.
Speaker Lambert congratulated the members and offered an aide-memoire or memory aid as “food for thought” to help them while discharging their important duty of reviewing and awarding contracts for the State of Pohnpei.
Mr. Quirino Loyola represented his colleagues and thanked the Governor, Speaker, and Members of 10th Pohnpei Legislature for their trust, support, and the opportunity to serve the People the best they can in that capacity. 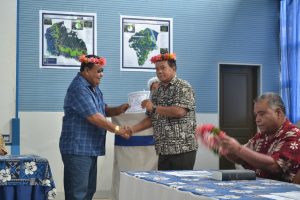 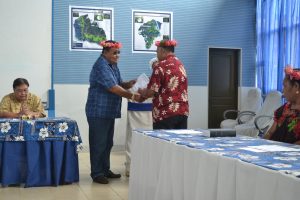 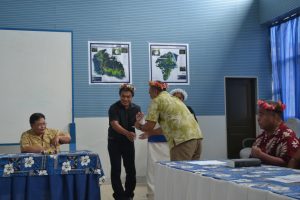 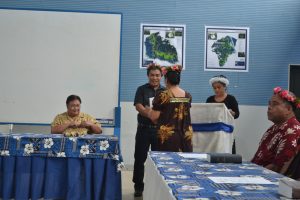 Congratulations to the new Board members! #Enginkehlap